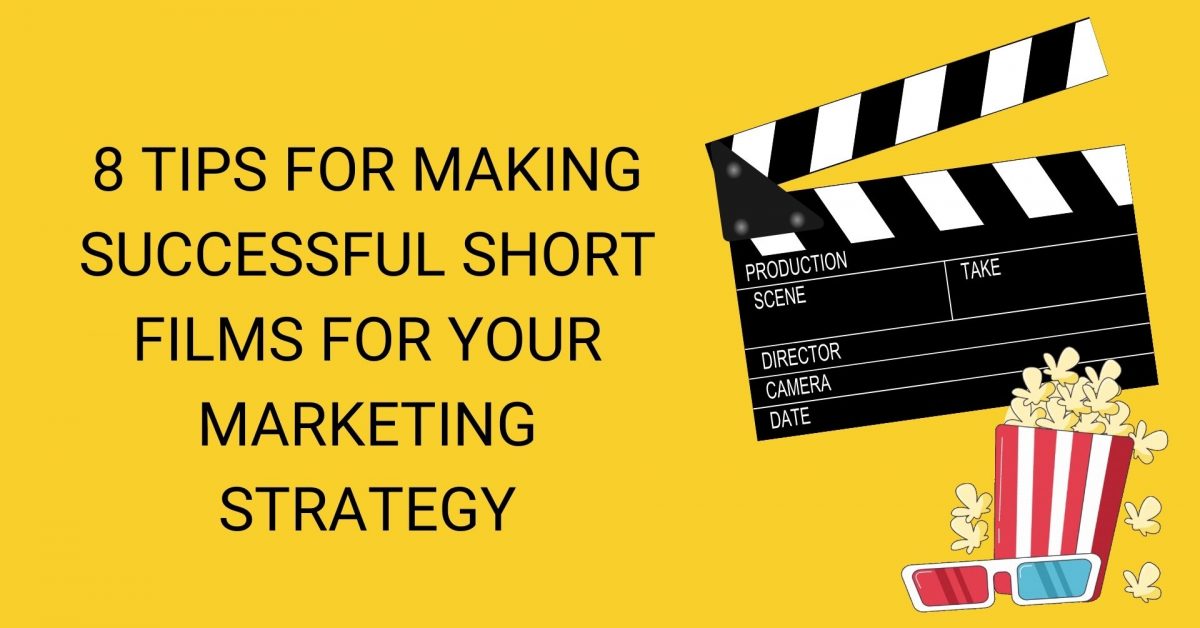 8 Tips for Making Successful Short Films for Your Marketing Strategy

Everyone seems to be talking about short films—be it on YouTube or your other social feeds. These videos are getting millions of views, likes, comments, and shares that every marketer may dream of! Audiences are equally enthralled by the different emotions short films generate.

Many businesses are using short films subtly to attract potential customers who are averse to advertisements that appear randomly when they are browsing through their feeds or watching videos. If you want to open newer avenues for your brand, then you should consider short films in your marketing strategy!

What Are Branded Short Films?

Branded short films help convey the role and purpose of a brand as part of a bigger story. Such films focus on a cause or story that transcends a product or service offered by the company and depicts what a brand supports and stands for.

In fact, branded short films are a very powerful video marketing tool as they do not resemble or feel like commercial advertisements. Today’s customers want to understand how a brand can help them solve problems and if they can trust and relate to you.

Short films can help you connect to your customers in a more humane and empathetic way. This is important because customers are usually more likely to do business with you if they can trust you!

Why Are Short Films Becoming a Favourite

Here are some reasons to include short films in your marketing strategy!

A short film that is relatable to viewers has the potential to definitely become the talk of the town and a topic of social sharing. For instance, a short film from Subway which drew parallels from the movie Boyhood starts with the birth of a boy, who is the protagonist. The movie then takes you through the journey of the boy’s life and self-discovery, ultimately taking him to rice fields and then returning to his country to start working at Subway. This short film particularly became viral on Twitter!

Brands can use short films to shed light on social issues that have not been discussed publicly. Moreover, documentary-based short films can also generate awareness and empathy among your viewers. Such issues or topics when portrayed carefully can help people feel inspired or represented by brands like yours.

The bottom line of a film or movie is to entertain. With short films, you can have a hook for your story, play the plot, and still keep your audiences engaged without showing your story in a hurry or in too much time. Short films on any event or a piece of news may not attract your customers’ attention as much as those that showcase a relatable story or drama.

For instance, Patagonia which is a brand for outdoor clothing and gear for sports has made many short films to their advantage.

Short films help upcoming and new filmmakers display their talent and share their voices. Your brand can work with such filmmakers and video production agencies to give a fresh breath of air to your marketing strategy!

How to Work on Ideas for Your Short Film

Here’s a quick checklist to help you churn ideas for your short film.

Whether you want to share the important work your company is doing or want to lead a conversation, making short films can get your brand heard. Here are some tips that you can follow.

#1 Bring focus to your key message

Heard about the elevator pitch? You can use the same idea here, i.e. try to condense your story into a key message that you want your audience to focus on. For instance, the focus can be on how your brand inspires people to know where their food comes from. Such clear, focused messages not only help audiences what you want to communicate but give your team a solid foundation to work with.

#2 Work on your takeaway

You would want to leave an impression on your audience—think about what you want them to take away after watching the short film. For instance, if you plan a short film about an economist changing the world, then you may want to showcase how he uses your technology supports his work.

#3 Convert your idea into a story

You want to tell compelling stories for your brand. If you are working with a video production agency, convey the following points to them.

#4 Pick the right cast for your story

Right casting is not just for feature films. Pick the right people to tell your story. You can consider interviewing actors. Think if casting a narrator will make more impact. Many times, if your casting isn’t spot on, your story will lose its charm and power!

#5 Aim for a visual story

Short films are all about telling your story visually. So, make sure your viewers are seeing as it is all happening. If it’s not about visuals, then your story may be good for animation or motion graphics. Consider the following points when planning your visuals.

It is important to pin down your budget. Many factors such as the length of your film, shooting days, travel, licencing cost, a requirement for animation or motion graphics, timeline, revisions, etc. can affect your budget.  Make sure to discuss with your production company to help make the right, timely decisions.

You won’t be able to shoot your film in just a couple of days. So, discuss a timeline with your video production agency and your expectations. For instance, you need to consider the timeframe for the following.

#8 Have a distribution plan in place

It’s not just about making a short film but making sure it reaches the right audience and platforms. Have a realistic conversation about how you want to promote and distribute your film for maximum ROI and engagement. Consider early on if you want to partner with any editorial outlet, rope in influencers, or want to go all out on social media by yourself!

With a solid idea in place, there is nothing more exciting than to have a successful short film that strikes a chord with your audience. Branded short films are a great way to engage and connect with your potential customers intellectually and emotionally. So, why wait, add short films to your video marketing strategy today!

Get in touch with BOXmedia to get going with your short film production and distribution!