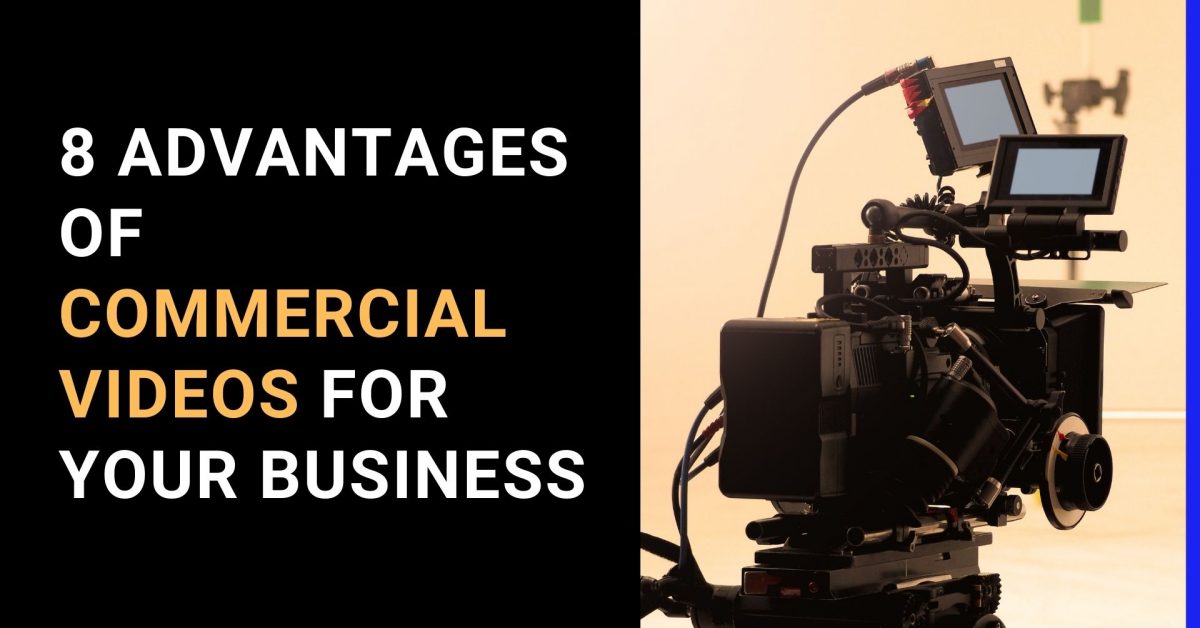 There are many advantages to using a commercial video for your business. Video ads can be more engaging than traditional forms of advertising, and it is easier to connect with the audience because people find it easy to relate to other humans rather than just words on a page. In addition, videos can be shared through social media quickly and easily which means you’re not only reaching the audience who is watching the video, but also those who have seen or heard about it through their friends. This article discusses 8 advantages of using a commercial video for your business including increased customer interest in what you have to offer as well as being able to reach more potential customers.

As many businesses have seen, videos often get shared through social media which means you can reach even more people. If it’s a video that is popular enough, the video could be shared by several different pages and groups on Facebook or other similar sites which exponentially increases the audience who will see your commercial. The likelihood that a video will go viral is not guaranteed; however, it could be your ‘edge’ against other companies and draw in customers who would otherwise be uninterested in what you’re selling.

2)   Videos grab attention more than just words on a page

People find it easier to relate to other humans rather than only words on a page. Videos give your viewers the opportunity to see you, hear you and get a better understanding of who is in the video. This makes it so much more engaging for them. Instead of just words, they are able to put a face with what you’re saying which can build trust between your company and consumers

3)   There are several methods to get your commercial out there

One of the best things about commercial videos is that you have so many options for marketing. Not only can you post it on your own social media pages, but you can also upload it to sites like YouTube where people are already spending time watching other videos. If your commercial is good enough, it will get shared by other people which means you will potentially gain thousands of viewers.

5)   Videos are sharable which means an increased audience

If done correctly, commercial videos can be shared through social media quickly and easily. Not only does this mean that the people who originally watched the commercial will see it, but also those who have seen or heard about it through their friends. This makes commercial videos a powerful tool for advertising because from one commercial you can reach thousands of potential customers.

The final advantage commercial videos have over other commercial types is that they’re much more cost-effective. Depending on what you’re selling, commercial videos can be made very cheaply even if you decide to use a professional commercial video company. This means that it’s within reach for small businesses and entrepreneurs who might not have a lot of money to spend on commercial advertising.

7) The attention span of the average person is getting shorter

You only have about 8 seconds from when a commercial comes on to get your commercial across before people change the channel. In order to make sure that you’re commercial stands out from the rest, commercial video production is a great option because it will catch viewers’ attention right away.

Videos are more engaging than the traditional forms of commercial advertising because videos allow you to show potential customers what your company is about. If it’s something unique, people will want to see more and potentially become interested in buying from you. Overall commercial videos are great tools for business marketing because they are engaging, cost-effective and can be shared easily through social media.

Commercial videos are a great way to advertise your company and increase customer interest in what you have to offer. They’re more engaging than traditional commercial advertising because people find it easy to relate to other humans rather than just words on a page. In addition, commercial videos can be shared easily through social media which means they could potentially reach thousands of potential customers with one video! Commercials make for an excellent form of marketing due to their cost-effectiveness, sharability, and versatility – not only do they work well when promoting products or services but also events like conferences or workshops. If all this sounds interesting and you want help implementing these principles into your commercial video production, let us know; our team is ready and waiting!